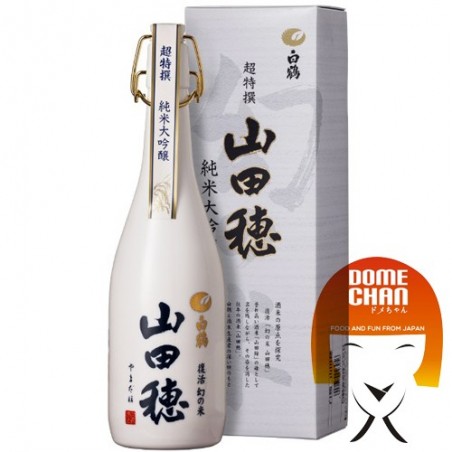 This sake gives off a fruity and fresh aroma. For its tasting it is advisable cold or with ice but can also be drunk at room temperature. This sake won a gold medal at the Monde Selection in 2011.

General information: The Hakutsuru house was created in 1743, at the foot of my Rokko, mountains near Kobe. Today Hakutsuru is the first international national Sake brand and has been repeatedly awarded prestigious awards. Hakutsuru in Japanese means "White Crane" which also has as its emblem. The secret of its excellent quality is based on the culture of the best rice species, the use of the purest little mineralized mountain spring water and the experience that goes back several generations. The Kano family is also the proud owner of the Sake Brewing Museum as one of the most visited cultural attractions in Kobe. For this sake is used only Yamado-ho type rice which for 60 years has been considered rare. This type of rice is the mother rice of the Yamada Nishiki variety, which is considered the king of rice for sake. This rice is 50% polished. This level of polishing is called Junmai Daiginjo. This sake gives off a fruity and fresh aroma. For its tasting it is advisable cold or with ice but can also be drunk at room temperature. This sake won a gold medal at the Monde Selection in 2011.

How to preserve: Cool, dry place away from direct light