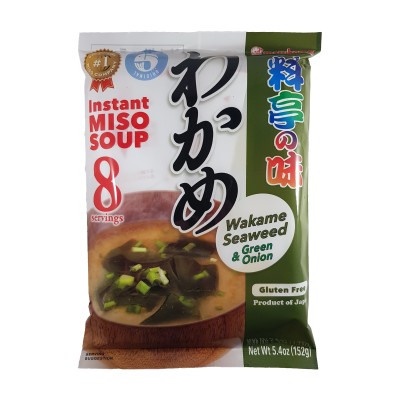 Classic miso soup with wakame seaweed. This very convenient package contains 8 separate servings of miso soup to use in the desired amount at all times. Just add hot water and it's ready.

General information: Miso soup is a traditional soup of Japanese cuisine consisting basically of broth, especially dashi mixed with miso paste. Miso soup takes its name from its main ingredient, miso, a fermented soy paste of various uses in cooking, especially in modern Japanese cuisine, where it is often used for marinating or gratin.  The basis of miso soup is dashi, a food consisting of dried striped tuna (katsuobushi) and a large seaweed called kombu. No need to add salt, as miso, by its nature, is already very salty. In this broth, to obtain the soup, the miso paste is dissolved, to which you can add cubes of tofu and other varieties of algae (wakame, for example). In accordance with Japanese tradition, the solid ingredients of the soup are chosen to reflect the changing seasons. So negi (chives-like plant) and tofu mix with the mild-tasting ingredients contained in the soup.  In the soup can be used other ingredients: carrots, daikon and potatoes, added in soup recipes in Europe and America. During the month of May, ingredients such as mushrooms, onions, shrimp, grated fish are added to the composition.

Storage methods: Cool and dry place away from direct light