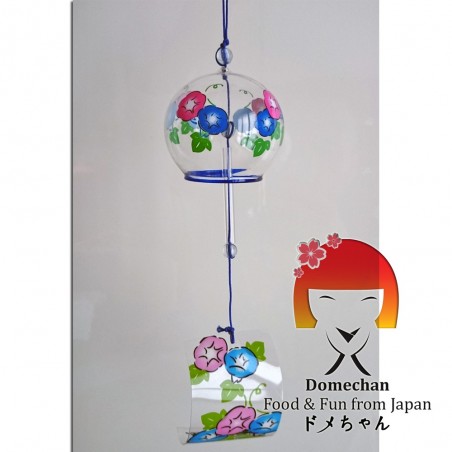 The term fūrin (- - hūrin), consisting of "hū" - wind - and "rin" - bell - takes on the meaning of "bell in the wind" in Italian. The ū, u with the symbol of the macron, is read as u double, the pronunciation is therefore fuurin. Originally from the Chinese tradition, fūrin has been introduced to Japan for centuries, so much so that it is traced in all kinds of artistic work and historical source.  The Buddhist monk Honen Shonin of Kamakura called him a "national treasure", for his supposed beneficial power, while at least since the Muromachi period the pleasant sound of fūrin is associated with summer.

The fūrins are hung from the gutters and fixtures of the dwellings, but also from the verandas and porches of these and the shops. They are also used to hang on the lower branches of trees and on supports of any kind.  In the summer months, the hottest and wettest season in Japan, fūrins are hung and left to tinkle throughout the nation, producing a sound that pervades the countryside and smaller centers, but also the metropolises thanks to the Strong Attachment of the Japanese to their more intimate and identifying folk traditions. In these months, in fact, the characteristic sounds of these lands are those generated precisely by the fūrin, together with the choir of the ubiquitous cicadas and the sound of hanabi fireworks.  The fūrin, far from realizing only a decorative function, was born to fulfill, and still fulfills, two fundamental purposes. It is in fact believed - traditionally - that, on the one hand, it makes the sultry heat of summer less heavy and oppressive, thanks to its very delicate sound, and on the other hand it is very ancient and still kept in vogue for the fūrin a cult function based on the belief that their sound keeps evil spirits away from inhabited places.  Finally, there are also particular fūrins used in meteorological function: some of them are in fact used in the study of winds, a phenomenon relevant in the Japanese islands, given the high density of typhoons and destructive atmospheric events due to the sub-tropical climate.  The extreme spread of fūrin has forced numerous Japanese urban centers to issue ordinances regulating the use of such typical bells, especially at night and in bad weather.